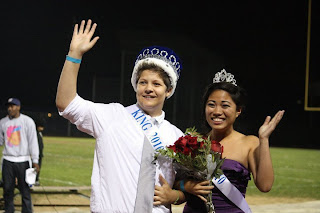 See, Dinnah Escanilla.  If you had let Andy Moreno run you wouldn't have had all that unnecessary drama at North Dallas HS and your name wouldn't be carved in transphobic infamy as the moral equivalent of George Wallace.

Here's a story  about a transperson running for homecoming king (or queen) that unlike Oak's and Andy's  school administration resisted runs to become homecoming royalty had a more positive ending.

Niko Walker just began his transition as he started his senior year at Culver City High.   When friends suggested the vice president of the school's Gender-Sexuality Alliance run for the homecoming court, he scoffed at the idea.  But they eventually talked him into running by pointing out it would be helpful and inspirational to others in the community. 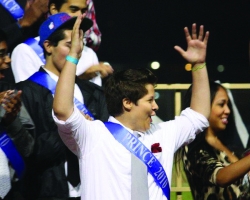 “If I ran and I won, it would be a big thing,” he said.  “For someone who is struggling with their identity, if they can see a transgender win homecoming, they would be more comfortable with themselves.”

And on November 6 he was crowned homecoming king at Culver City High School.

Walker’s win makes him the first-ever transmale student in the United States to be elected homecoming king at his school and keep the title.  Oakleigh Reed of Muskegon, MI. won at his school, but was denied the crown by school officials.   .

“At first I was like: ‘Did they just say my name? I was so confused!” he said moments after the win. "After it set in, I felt really accomplished,” he said.  “I set out to prove a point and I proved it.”

Yep Niko, you proved that if we're allowed to do something, transpeople can usually accomplish anything we set our minds to do.

Congratulations and all hail King Niko!.