Chuck, Buy A Vowel And Get A Clue, Fool. 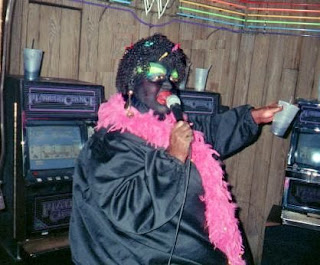 As many of you are aware of I'm still raising funds for a backup computer and emergency repair fund.   I received a $5 donation from that new millennium minstrel show fool Chuck Knipp which I immediately returned and then called his rotund butt out in the process

Well, he's back, and his not Hooked on Phonics behind didn't get the message that I don't want his tainted money.    He sent an .88 donation on November 7  and followed it up on November 10 with another donation  (which I'm returning) with this insult attached to it.

10 cents: For calling yourself a Christian yet weekly calling people "fools".. readMatt. 5:22 10cents: For tragically begging for blogging awards or speaking engagements. Bonus2 cents: for never posting a clear picture of yourself, for good reason.


Gee, Miss Chuckie, did I strike a nerve?   Good.   As Mr. T. so eloquently stated,  fools are everywhere, and you prove that adage to be true on a regular basis.

You're just a bitter old racist queen who wishes on his best day he could look as good and be as talented as me, Jasmyne Cannick and your legions of Black female critics of your non-humorous minstrel 'show' that you have to skulk around in secret to do and it still gets protested or canceled.  .


As for these awards I have up here, I earned them.    You jealous I get invitations to do these collegiate speaking engagements on a regular basis while campuses like Eastern Kentucky University CANCEL your appearances because of your controversial and racist alter ego?


As I said before, keep your minstrel show cash that you send in insulting amounts.  If you were making soooo much money on it as your defenders claimed you were when the SQL protests were in full swing around the country, you could have afforded to give more than the $5 you initially did.and you still wouldn't be working at that Lexington hospital

So step off, nekulturny fool     You and RuPaul deserve each other.