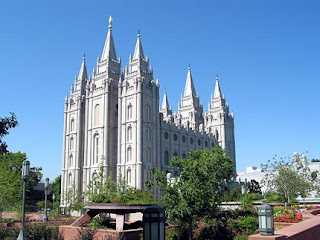 Many African-Americans don't have much love for the Mormon Church because of the racist doctrines they held about our people for over 100 years.

Some paid a heavy price for it.  Eight Black UTEP track team members who refused to participate in a track meet scheduled in Provo were dismissed from the team.  One of those eight was future long jump record holder and Olympic champion Bob Beamon.


Later that fall 14 Black members of the nationally ranked and three time WAC champion University of Wyoming football team were dismissed before playing BYU because they asked to wear black armbands during the game.   The ensuing drama of those racially charged dismissals at Wyoming almost tore apart the WAC, as it led to Stanford canceling their sporting relationship with BYU, more student protests at other schools in 1970 along with increasing societal pressure that led to the Mormons changing the anti-Black policies in 1978.


I and many trans people don't like their anti-trans stances, and the latest news out of Salt Lake City guarantees that we'll still have reasons not to like the LDS.

The LDS publishes what they call the Church Handbook of Instructions, which s a two volume book prepared by the First Presidency and Quorum of the Twelve Apostles that is the LDS policy and procedural guide.   It is only distributed to people who fill certain leadership roles within the church hierarchy, and the last time it was published was in 2006.

In the latest edition of Church Handbook of Instructions, celibate gay Mormons can rejoice in it according to the Salt Lake Tribune.    It states that celibate gay Mormons should be allowed to participate fully in the church and to have “callings,” or church assignments.

In addition, the Handbook of Instructions struck language that called upon gay members to repent their “homosexual thoughts or feelings.”, that gay unions 'distort loving relationships', and suggests that gay members “may need professional counseling … in harmony with gospel principles.”

But trans Mormons continue to get the back of the LDS church's hand in this latest edition of the handbook.   They did not change the prohibition on anyone who has had GRS from having callings or holding a leadership position in the church.

So what will it take for transpeople to be considered human in the eyes of the Mormon church?


Maybe another series of protests of BYU sporting events?