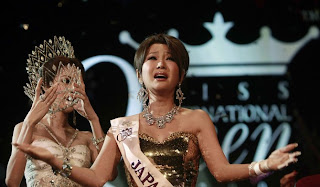 The 2010 edition of the world's most well known trans beauty pageant gets underway this week in Pattaya, Thailand  with 25 transwomen from around the world competing for the chance to be crowned the successor to 2009 queen Ai Haruna of Japan.

The finals will be televised live on Thai television Friday night Thai time (Thursday our time)  and over the years have garnered international new coverage.

The Thais take their pageants seriously, and this one gets treated with the same level of respect they do with any cis pageant.   Winner gets $10,000 USD and a nice prize package.

While we're waiting for this week's Miss International Queen contest to play out, here's some YouTube video from last year's pageant and the announcement of the 2009  ten finalists.