Transpeople Are An Oppressed Minority Group 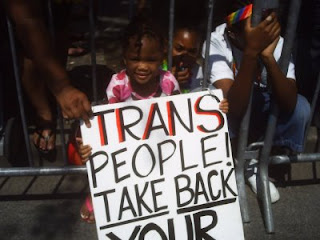 When you talk about oppressed groups,  here are some of the characteristics in political science terms.

*The oppressed group makes up a numerical minority of the population in the nation they reside in.
*Faces persistent discrimination and violence from the majority population
*Has minuscule or no political representation at the local, state or federal legislative level

Doesn't that sound like the description fits a certain part of the GLBT family?

Despite the recent reelection of Kim Coco Iwamoto to her Hawaii State Board of Education seat, Victoria Kolakowski's election to a state judicial bench in Alameda County, California and Phyllis Frye's historic appointment to a municipal judgeship in Houston,  the reality is there are no open transpersons serving in the United States Congress, any state legislature, and any large population city either on their city councils or as mayors.

So yes, we are an oppressed minority group.   That has been crystal clear to those of us on the POC end of the trans community, but that realization for you vanilla flavored transpeeps has been a little slow to sink in.

The sooner you get that realization through your heads, the sooner we as a community can start to deal with the dearth of trans political representation and move our civil rights agenda forward.