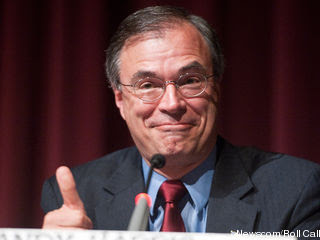 Dr. Andy Harris was one of the loud Tea Klux Klan voices railing against the health care bill during that contentious debate in 2009.    He rode that wave of white working class anger at the Democrats all the way to a congressional seat in Maryland's 1st District..


So as the freshly minted Republican congressmember from a district  that he won in large part because he was a one issue candidate pledging to repeal the health care bill,  what question was first and foremost on his mind at the congressional orientation?

Where's my government health care, and why do I have to wait 28 days after I'm sworn in on January 5? 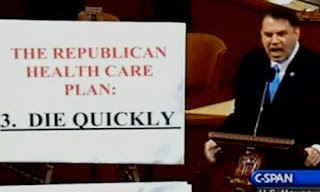 And BTW, the 'free market' solutions don't work if you don't have the money to pay for them.

According to an unnamed congressional staffer quoted in Politico, Harris stood up at the meeting "and asked the two ladies who were answering questions why it had to take so long, what he would do without 28 days of health care."

Do what the rest of us without health care coverage do, Dr. Harris.    Don't get sick.

You only have to worry about it for 28 days and you have a government job    What about people who don't, and to who the 'free market' solutions you espouse obviously aren't working?

But then again you've already revealed that you're just as selfish as the Republicans already residing inside I-495 and you'll fit in perfectly with them.

I was wondering how long it would take for the Tea Klux Klan reps to show their true corporate colors and confirm what I suspected about them a long time ago.  They are typical white privilege wielding, racist 'do as I say and not as I do' Republifools. 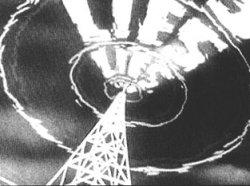 And once again, as they have done over the last 150 years of United States history, the lower middle class low information white electorate allowed themselves to be bamboozled by their lies of their upper class peeps and Fox Noise.

They once again on November 2 voted for people who will enact policies that benefit only upper class white people at their expense.  When those policies bite them in the behind as usual, they'll blame it on the Democrats, the party that's trying to help their clueless azzes.

Dr. Andy Harris, I have a question for you and your Tea Klux Klan friends:.

If government run health care is good enough for you to gripe about not having for 28 days, where's my universal single payer health care?