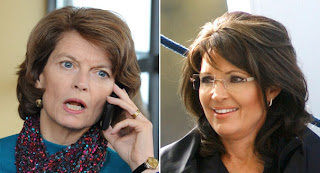 Hey Joe, how's that Caribou Barbie endorsement working for you?

The Murkowski-Palin feud just got more propane poured on it as Lisa Murkowski pulled off a historic win in Alaska over the Sarah Palin endorsed Joe Miller, who beat her in the GOP primary.

Miller was 'refudiated' by Alaska voters as Murkowski became the first person since the late Strom Thurmond in 1954 to win a US senate seat via a write in candidacy.

There is no love lost between Sen. Murkowski and Sarah Palin since she knocked off Lisa's father Frank Murkowski, who was the sitting governor at the time in the GOP primary in 2006 and eventually won the governor's chair.

Murkowski said she wouldn't be supporting Caribou Barbie if she decides to run because she doesn't have the 'intellectual curiosity ' for the job.

Gee senator, tell us something we don't already know. Sarah Palin isn't qualified or fit to be president of the United States.

"I just do not think she has those leadership qualities, that intellectual curiosity that allows for building good and great policies," Murkowski told Katie Couric in a "CBS Evening News" interview. "You know, she was my governor for two years, for just about two years there, and I don't think that she enjoyed governing. I don't think she liked to get down into the policy."

It's going to be fun to see how the next chapter in this Alaska political feud plays out, but Palin is going to have to see Sen. Murkowski in the senate for the next six years