One of the things our opponents consistently rail about is the Almighty Porcelain Throne Room.    In their zeal to use the bathroom as their lone propaganda weapon of choice in their fight to keep trans people from getting our badly needed constitutional rights, they've used falsehood filled 'bathroom predator'  arguments.

Some of our opponents have even suggested we use the bathroom based on the genitalia between our legs irregardless of the physical morphing of our bodies.

Um, no.   Here's an example of why transpeople reject that latter argument.

A Canadian transman in the early stages of his transformation was struck in the face at St. Thomas University in Fredericton, NB because he entered the women's restroom

Now imagine what would happed to a transwoman if she were forced to or told she had to go to the men's room despite estrogen working its feminine magic on her body.

Does the word 'boot dance' conjure up any painfully problematic scenarios for you?

I'm not down with taking a beatdown simply to pee.  That's illogical    While I try to role model Kingian principles in my life, there are times when if you put your hands on me in anythign but a loving manner, be prepared for the consequences of that action. especailly when all I want to do is simply pee in peace. 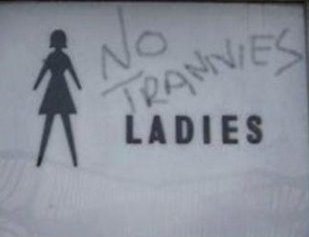 The point is, and it bears repeating, there is NO documented instance of a transperson sexually or violently assaulting any cis person in a restroom.    Truth be told, the assaults that are documented like the incident in New Brunswick are the other way around and we are on the receiving end of the violence.

So I ask the question again that I've asked in other posts on this blog..  Can a transbrother or transsister pee in peace?    And if no is your answer to that question, why is it your business or concern what bathroom I and my transpeeps use anyway?