I used to spend a lot of fall Saturday nights in the Astrodome and Rice University press boxes as a kid enjoying my bottomless soda cups and watching the Texas Southern University Tigers take on their SWAC competition.

My father was the play by play man for TSU football back in the day, so in addition to the first rate press box cuisine at the Dome I got to see a lot of outstanding future NFL players such as Hall of Famers Walter Payton and Doug Williams, and TSU stars such as Oilers wide receiver Ken Burrough and Julius Adams .

While TSU has had 60 players make it to the NFL, onee thing I didn't see a lot of was TSU winning the SWAC or a lot of football games.    Those were the days of Eddie Robinson and his Grambling Tigers dominating the league. 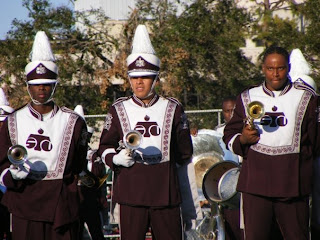 TSU's most recent SWAC title in football was one they shared with two schools in 1968.  I sat through a lot of games in which the only thing I could brag about was the halftime performance of the Ocean of Soul marching band.

The 2010 edition of the Texas Southern University Tigers shook off a 1-3 start under TSU alum and current head coach Johnnie Cole who was their quarterback back in the day.

The Tigers have ripped off seven straight wins, including a 41-34 overtime victory over long time pain in the butt Grambling to capture the SWAC Western Division Crown.


They did so last night by beating Arkansas-Pine Bluff 20-13 and punched their ticket for a trip to Birmingham to attempt to win TSU's first ever SWAC outright championship.   They will take on SWAC Eastern Division champ Alabama State on December 11.

They will also be ending their recent nomadic search for a football home by moving next year to the new downtown stadium being built for the MLS Houston Dynamo.

But I'm happy to finally see TSU have some success on the football field and so are all my family members who are TSU alums.


Good luck at the SWAC Championship game Tigers and beat the ASU Hornets!