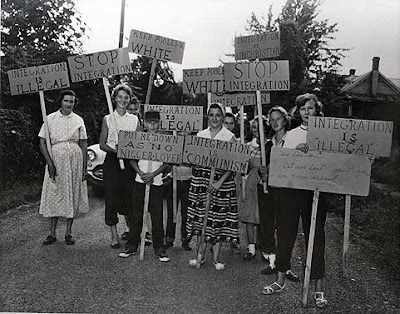 One of the things I'm really getting sick of in online and offline discourse is conservative white people spitting the word 'racist' at non-white people who call them on their privilege-laden bull feces.

And don't even try that predictably sorry tactic of quoting a white washed (pardon the pun) dictionary definition of 'racism' .

To break it down again, there's a great definition in the book Trojan Horse: Death of a Dark Nation
that's closer to the reality.

Racism is the systematic discrimination, denial of rights and benefits by whites against non-whites in all areas of human activity.  (economics, education, labor, law, politics, religion, sex and war).

Until 'whiteness' and white supremacy is expunged from society, we do not have an equal playing field in society.   POC's can be prejudiced or bigoted toward white people, but racism is taking that bigotry and prejudice and infusing it with power.

POC's do not exist with the type of individual or group power to prevent whites from doing anything against their will.   If that were the case the House would have stayed Democratic Tuesday night, George W Bush, his daddy and Ronald Reagan would have never seen the inside of the White House, and this would be a much more fairer and better nation..