Why Y'alll STILL Hatin' On Beyonce? 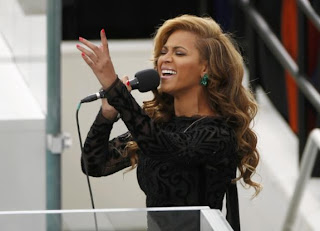 Frankly, I think a lot of the industrial sized Hateraid that's directed at Beyonce Giselle Knowles stems from jealousy. She's living what seems like a fairy-tale life. She's breathtakingly beautiful but down to earth. She's won Grammys. She sings the national anthem at the 2004 Super Bowl played in our hometown. She has a wealthy boyfriend in Jay-Z. She just became the first non-athlete, non-model and the second African-American woman to do the coveted Sports Illustrated swimsuit issue cover solo. If I'd come up with her story as the basis for a fiction novel people would roll their eyes and claim it's unrealistic.

It's been a week since the inauguration in which she did a kick azz rendition of the national anthem and  looked good doing so until US Marine Corps band member Master Sgt. Kristin duBois mysteriously opened her mouth and accused her of lip syncing it.

Still have to ask the things that make you go hmm questions as to what motivated Sgt duBois to do so in the first place.  I'd also like to know more about her accuser Sgt duBois down to her ethnic background..

I also find it interesting that duBois and the media were quick to claim Kelly Clarkson wasn't lip syncing, but felt the need to pile on Beyonce Knowles-Carter.

Even Sen Chuck Schumer (D-NY), who is head of the Joint committee that organizes the inauguration event is reportedly demanding an apology.

Careful Chuck, Jay Z is a New York resident and probably won't be too happy that you're joining in the media feeding frenzy and fake controversy aimed at his wife.  He may remember that when you show up at his office in 2016 trying to get a contribution for your reelection campaign


So what's up with the hatin' on Beyonce meme that seems to be fueling this kefluffle along with the deep seated conservaneed to do something to embarrass the POTUS?

Some of you peeps just live for hatin' on Beyonce, whether it's the feminist community , the gossip blogosphere, or just you peeps full of foaming at the mouth jealously that Beyonce in her 31 years on the planet has been blessed many times over.

You peeps hating on Beyonce isn't going to change the fact she has a daughter, married a man that is worth $500 million, has $200 million of her own money in the bank, had a trophy case full of awards, and will be the halftime entertainer at this year's Super Bowl.

And she's once again is going to look fabulous doing it.
Posted by Monica Roberts at 8:30 AM