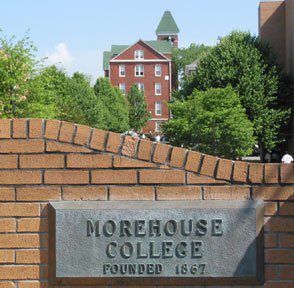 HBCU's need to send the unmistakable message to their faculty, current and future students, alumni, and the communities they serve that discrimination against LGBT students on HBCU campuses will not be tolerated, they have inclusive and welcoming campuses, and they are willing to include LGBT students in their ongoing missions to uplift the race through educational achievement.

In a remarkable advance for a campus that in the 90's was considered one of the Most Homophobic by the Princeton Review, Morehouse College's first ever LGBT history course got started today.

The student initiated course is entitled "A Genealogy of Black LGBT Culture and Politics" and meets twice a week on Tuesdays and Thursdays.   It has the goal of outlining various concepts in Black feminism, cultural theories, and the methodology behind them.

Allen is teaching the course t his semester via video conference from Yale and student reaction to the groundbreaking class has been positive.   More than 20 people registered for the class; with some of them coming from neighboring all-female Spelman College.

It will be interesting to see how this class evolves as the semester plays out.   There will also be interested observers inside and outside the ATL watching to see if there will be more LGBT class offerings on the campus that proudly claims Dr. Martin Luther King, Jr as an alum.
.
Posted by Monica Roberts at 10:00 PM