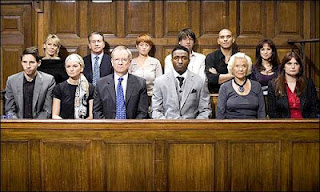 I've had the honor and pleasure to serve on juries three times in my life   I did so once at the county court level and twice at the municipal level in Houston.

Two of those times it has happened for me post-transition, and as much as I was looking forward to seeing how Kentucky went about conducting jury duty and comparing and contrasting it with how it's done in Texas, I was never called in the eight years I lived there.

Rep. Susan Davis (D-CA) has introduced a bill in Congress to make sure all TBLG citizens can do what I had the pleasure of doing.   Before you start griping, I'm going to give you a little food for thought in this post as to why you should be supporting this bill.

The Juror Non Discrimination Act Rep Davis introduced with 14 cosponsors prohibits a person from being removed from a jury because of their sexual orientation or gender identity.

“Serving on a jury is one of America’s most cherished civic duties,” Rep. Davis said. “It is unjust to exclude a particular group of people from participating in civil society because of whom they love or what they look like. The federal government already prohibits juror discrimination on the basis of race, color, religion, sex, national origin, and economic status and as we pursue greater equality for all Americans, I believe LGBT Americans should be also be free from juror discrimination.”

It's also a major problem that denies GLBT citizens a jury of their peers should they find themselves in courtroom seeking justice, as a defendant in a case or simply exercising their opportunity to engage in public service like I've had the opportunity to do post-transition.

And let's be real for a moment.   If you were seeking justice in a courtroom, wouldn't you want as many people from the rainbow community as possible sitting in that jury box?  You would also want SGL and trans community members fighting on your behalf in the deliberation room dispelling myths and misconceptions about our community that could potentially adversely affect the verdict you get.

I've seen far too many murderers of trans women get what amounts to a legal slap on the wrist for their crimes and I believe the lack of TBLG people on these juries plays into that.

Senator Shaheen noted when she introduced this bill, “Our country is founded on the principles of inclusion, acceptance, and equality.  The jury selection process in federal courts should reflect those principles.”

If we LGBT people are going to demand human rights coverage in our nation's laws, one of the taxes we pay for that is jury service.

If we deserve a jury of our peers when we access the justice system, we need to have some of our LGBT peers sitting on those juries.