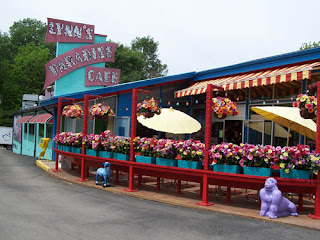 But was shocked to read via a post on Angie Fenton's FB's page and commentary from my other Louisville friend's pages that after 22 years in business, the legendary independent restaurant that is Lynn's Paradise Cafe has closed its doors.

I had the pleasure of eating there when I lived in Da Ville and even experienced the tradition of a New Year's pajama breakfast there.

It's so well known nationally that during Derby it's tough to get a table in it.  Then Senator Hillary Clinton is one of the long list of notable people who have visited Lynn's.  She did so during the May 2008 Democratic presidential primary in Kentucky.

The details are still coming out and the accusations are still flying as to exactly why the doors have closed on this Louisville institution.  But I'll probably be finding out from all my Louisville friends what's up in the ensuing days as more info becomes available.

Whatever the reason, still sad to hear it happened.
Posted by Monica Roberts at 10:30 AM