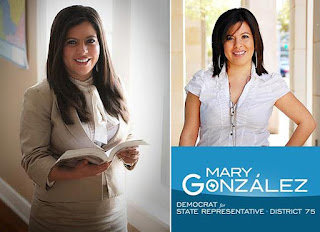 The 83rd session of the Texas Legislature gets started today and runs for 140 days until late May.  For the first time since Glen Maxey left office in 2003 there will be a rainbow community legislator on the floor of our state capitol in Austin. .

She's 29 year old Mary Gonzalez (D) from El Paso, who was the first out woman of color to run for the Texas state legislature.   She beat two opponents in the May primary to win her District 75 seat..  She had no Republican opponent in the general election.

Representative Gonzalez is also a trailblazer in another respect in terms of being the first legislator in the nation to declare publicly that she is a pansexual..

Gonzalez originally ran for the legislature to gain access to clean drinking water and better educational opportunities for her district, but her sexuality quickly became something she had to repeatedly address on the campaign trail.  Mainstream media called her the Latina lesbian lawmaker and the coverage led to negative comments about her dating men in the past, accusations she was not a “true lesbian,” Gonzalez said.

But since her sexual orientation was made a campaign issue, she decided to wait until after the election to clarify it.   The bottom line is that she'll be the one representing District 75 and hopefully that will be for a long and distinguished legislative career.
Posted by Monica Roberts at 12:00 AM