Joanne Cassar Is Still Fighting For Her Human Rights 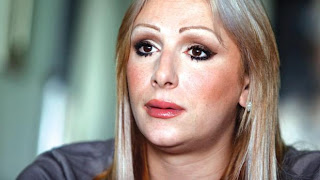 I've been curious to find out what has been transpiring in Joanne Cassar of Malta's life since I wrote my last post on her now seven year roller coaster battle for her right to marry that started in 2006.

She took her case to the European Court of Human Rights where it was heard in July 2012, and she is now awaiting a ruling on it.

Still haven't seen anything yet concerning a ruling from the ECHR, but did stumble across a recent Times of Malta article featuring her and detailing some of the foul transphobic crap that has been aimed her way in that European island nation as she fights for her human rights.

In the past the 31-year-old, who underwent gender reassignment surgery nine years ago, has even been beaten up because of who she is. The latest violent episode was three years ago when she was at a carnival party in Gozo.

“I was walking off the dance floor. I was hit on the head with a bottle and kicked in my chest and stomach. They stole my bag,” she recalled, adding she did not see the point in filing a police report.
“What would I get out of it? I’d end up having to go to court repeatedly… and if I had to file a report each time I’m insulted, I might as well move into the police station,” she said.

“When I sense trouble I tell the bouncer or leave the club, even if it means crying myself to sleep. I try to make it look like I don’t care, but I do. Some people hate people like me and I don’t know why,” she said.

“But my greatest disappointment is that we are in 2013 and I’ve been fighting for a human right for seven years,” she said, referring to a pending case before the European Court of Human Rights where she is fighting for the right to marry.


Yeah, I feel your pain Joanne.  And that's why we're fighting all over the globe to make trans human rights a reality all over the planet so our transkids don't have to endure the crap we've had to deal with.  .