Remember last year's series of posts I wrote urging the trans community and the liberal progressive blogosphere to support an organization that stood up for us and was getting attacked by to conservafools for it?

The wingnuts tried and failed to go after the Girl Scouts annual cookie drive in 2012, and now that we are into the second week of the new year Girl Scout cookie time is upon us once again.

I don't doubt for a millisecond that the conservafools will try that reprehensible tactic again.

There were 760 million boxes of cookies sold in 2011, 714 million sold in 2010 and I have yet to see what the numbers were for 2012.  The wingers will probably be deploying their conservahatred of the Girls Scout again, so we need to be ready to rebuke that bull feces when it starts. 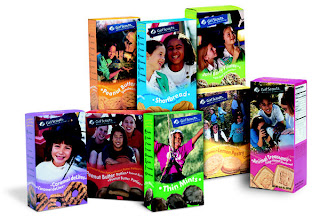 You'll be seeing these beautiful young ladies hanging around your local area stores, so do those younglingss in the Girl Scout uniforms a favor and buy some cookies from them.  You'll not only be supporting a great organization now into its second century of service to all young women around the world, you'll also be support an organization that stood up for the trans community too.

And I think that's worth spending a few bucks on several boxes of Thin Mints, shortbreads, or whatever your fave Girl Scout cookie flavor is.
Posted by Monica Roberts at 2:00 PM