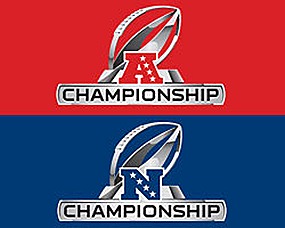 When the Texans lost I considered my NFL season over, but know it has a few weeks left to run that include Championship Sunday and the Super Bowl in New Orleans.

Had a 1-3 Divisional round.  I was going for an Texans upset with one of the picks, was surprised about  Denver's late game collapse and even more surprised about Colin Kaepernick showing up and showing out for the Niners in his debut playoff game against Mr. Discount Double Check and his Packers.

Mike's picks are here, so let's get busy with the Championship Sunday NFL picks.

It's the Angry Birds vs The Brady Bunch in a rematch of last year's AFC championship game which the Ravens should have won.   The Ravens won the regular season matchup 31-30 back during Week 3 at M&T Bank Stadium but it's now January and they are playing this game in Foxborough.

The 12-6 Ravens beat the precocious Colts and the number one seeded Denver Broncos in double overtime to get to this championship game while the13-4 Patriots beat the Texans after a week off.

The Ravens have played a lot of football to get to this point, so the question is do they have enough in the tank to get them through another game with New England's high octane offense?   Speaking of offense, will good Joe Flacco continue to play well?   Will Ray Rice get the touches he needs for the Angry Birds to be successful on offense?  Will Ray Lewis' last game be played in New Orleans?

The way the New England offense has been going lately, I'd say no. Patriots to win this one.

After nearly coughing up a 20 point lead and the game last week against Seattle, the 14-3 Atlanta Falcons have another tough test at the Georgia Dome with a 49ers team that demolished the Green Bay Packers behind a record setting 181 yard rushing performance by quarterback Colin Kaepernick.

Atlanta has  some offense firepower of their own with their twin wideout threats of Julio Jones and Roddy White and ageless tight end Tony Gonzalez who would like to close out his career with a Super Bowl trip to New Orleans.

The 49ers however are coming to the ATL on a mission of erasing the pain of their overtime loss to the Giants in last year's NFC title game, and frankly, I think they'll do it.

At least one Harbaugh brother will get to coach in the Mercedes Benz Superdome February 3.   49ers to beat the Dirty Birds.