150th Anniversary Of The Emancipation Proclamation 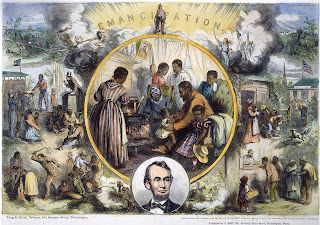 And by virtue of the power, and for the purpose aforesaid, I do order and declare that all persons held as slaves within said designated States, and parts of States, are, and henceforward shall be free; and that the Executive government of the United States, including the military and naval authorities thereof, will recognize and maintain the freedom of said persons.
And I hereby enjoin upon the people so declared to be free to abstain from all violence, unless in necessary self-defence; and I recommend to them that, in all cases when allowed, they labor faithfully for reasonable wages.
And I further declare and make known, that such persons of suitable condition, will be received into the armed service of the United States to garrison forts, positions, stations, and other places, and to man vessels of all sorts in said service. 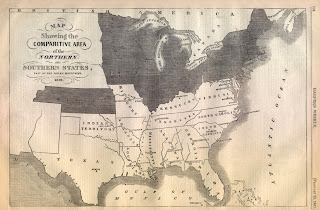 150 years ago today on January 1, 1863, the Emancipation Proclamation was signed by President Abraham Lincoln and took effect.

At that moment, 3.1 million of the 4 million slaves in the US according to the 1860 census were freed, but it did not apply to the five slave states that remained in the union nor to most regions already controlled by the Union army.

Of course, the Confederates reacted with predictable outrage.  They pointed to the Emancipation Proclamation as proof they were justified in seceding and launching their armed rebellion against the federal government to preserve slavery because in their minds Lincoln would have abolished it anyway.

But conversely, Lincoln probably would have had a tougher time doing so had all the Confederate states not seceded and stayed in the union. 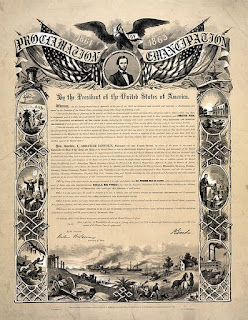 The Emancipation Proclamation had been discussed in the Lincoln Administration as early as the summer of 1862 as a way to cripple the Confederacy, who was dependent upon slave labor to drive their engine of war and agreed to, but Lincoln felt he needed to do so after a Union battlefield victory.

The strategic Union victory at Antietam in September 1862 gave President Lincoln an opportunity to announce his plans to issue the Emancipation Proclamation and hinder the Confederacy's efforts to gain international recognition and aid from Great Britain and France.   Five days after Antietam, on September 22 1862 the preliminary proclamation was announced that ordered the emancipation of any slaves in the CSA states that didn't return to federal control by January 1, 1863.  When none did so, it took effect on that date.

There have been spirited arguments from 20th century African-American scholars such as W.E.B.Du Bois, James Baldwin, Julius Lester and Lerone Bennett over just how effective the Emancipation Proclamation was in terms of emancipating our ancestors.   Some called it a worthless piece of paper, while Bennett went even farther in his criticisms in this 2000 book Forced Into Glory: Abraham Lincoln's White Dream.  Bennett asserted in the book that Lincoln was a white supremacist who issued the Emancipation Proclamation in lieu of the real racial reforms the radical abolitionists were pushing for. 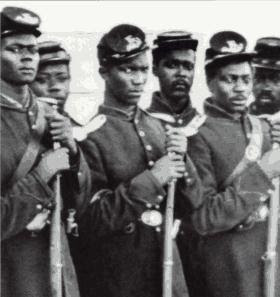 In the short term it had several effects.  It converted the Civil War into not only a cause to reunify the country, but added the moral component of ending slavery.

It put a permanent halt into Confederate efforts to get Great Britain and France, nations that had abolished slavery, into recognizing a treasonous group of American states trying to form a nation based on the principle of perpetuating slavery.

As Lincoln had hoped, as word of the Emancipation Proclamation spread throughout the South, slaves began to escape and headed to the Union lines in anticipation of freedom.  They enlisted in the US Colored Troops, providing a brand new source of manpower for the Union efforts while depleting the manpower of the slave labor dependent Confederacy.

As the Union armies advanced into formerly CSA held territory, they were also freed.  Unfortunately in my home state of Texas, freedom didn't come for my ancestors until June 19, 1865, two months after the War To Perpetuate Slavery was over.

The Emancipation Proclamation did not make slavery illegal in the United States.  It merely provided the legal framework for emancipation of slaves as the Union armies successfully advanced.  It also created the political conditions that led to the passage in Congress and ratification of the 13th Amendment that abolished slavery in the United States. 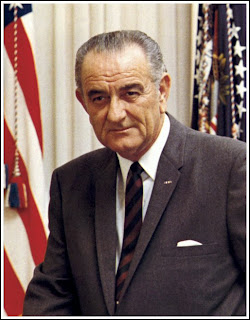 President Johnson referenced this during the 100th anniversary commemoration of the Emancipation Proclamation's issuance during a Memorial Day 1963 speech at Gettysburg, PA and connected it to the ongoing Civil Rights movement activity.

"One hundred years ago, the slave was freed. One hundred years later, the Negro remains in bondage to the color of his skin. ...In this hour, it is not our respective races which are at stake--it is our nation. Let those who care for their country come forward, North and South, white and Negro, to lead the way through this moment of challenge and decision....Until justice is blind to color, until education is unaware of race, until opportunity is unconcerned with color of men's skins, emancipation will be a proclamation but not a fact. To the extent that the proclamation of emancipation is not fulfilled in fact, to that extent we shall have fallen short of assuring freedom to the free.

President Johnson also referenced the proclamation again during a March 15, 1965 congressional speech announcing the introduction of the 1965 Voting Rights Act one week after Bloody Sunday.

It seems fitting that 150 years later, we have an African-American president who is also an Illinois resident  issuing a proclamation of his own commemorating what President Lincoln did back in 1863.


But the Emancipation Proclamation was the precursor for the 'new birth of freedom' as Lincoln called it in his Gettysburg Address, although it came for African-Americans at a bloody cost and a 'with all deliberate speed' pace.