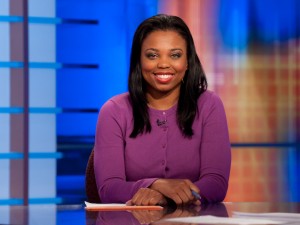 I love watching her live up to the long, proud legacy of siatah sportscasters with her commentary on all things sports related on the various shows and platforms on the ESPN network .

In addition to her ESPN.com columns and appearances on ESPN Radio, she appears on the shows First Take and Around The Horn and just completed her first season appearing as a sideline reporter for college football broadcasts on ESPN and ESPN2.

Was not to happy to find out some pointed hood wearing waste of DNA took his time to go old school with his hatred.   He took the time to write Jemele a racist letter that she shared with her Twitter followers.

She's shown her sense of humor about the whole incident, quipping that homeboy accomplished the feat of racially insulting her without resorting to the n-word.  But it's still no joke she even received that stank letter in the first place, much less homey felt vanillacentric empowered enough to write it in the first place. .

And as I like to say about a lot of my haters, he hates you because he wants to emulate you.