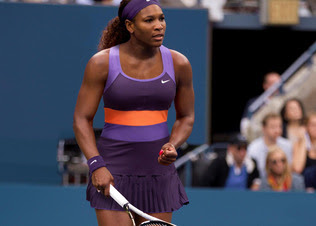 Little Sis' quest for her sixth Australian open singles title is still on track thanks to her fourth round straight set blitzing of 14th seeded Russian Maria Kirilenko.

It took number three seeded Serena less than an hour (57 minutes to be precise) to post her 6-2, 6-0 win and set up an intriguing quarterfinal match up with the woman who is touted in international and US tennis circles as possibly being 'the next Serena'. 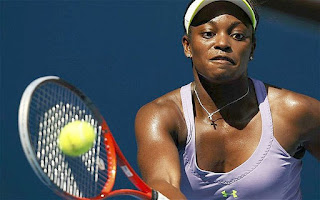 She is 19 year old and 29th seeded American Sloane Stephens, and yep, she's a sistah playing in her first Grand Slam tournament.

Stephens outlasted Serbia's Bojana Jovanovski 6-1, 3-6, 7-5 to set up the match with the woman Stephens described as her childhood idol.   They have already faced each other in Brisbane, a match that Serena won 6-3, 6-4.

But this time it's in the Australian Open quarters, and her idol has not dropped a set in her methodical march to the quarterfinals.

Winner of this match will take on the survivor of the Victoria Azarenka-Svetlana Kuznetsova match.    Azarenka is the defending Aussie Open champion and tournament number one seed while Kuznetsova sent 10th seeded Caroline Wozniacki packing 6-2, 2-6, 7-5. 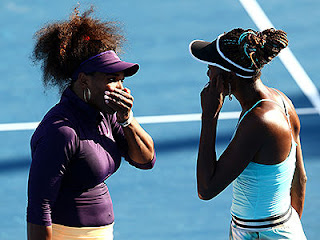 As I mentioned in a previous Williams Watch report, the sisters are still kicking butt and very much on track in their quest for their fifth Australian Open doubles crown.

They have yet to drop a set in theis tournament, and the 12th seeded Williams sisters now face in the doubles quarterfinal round the Italian duo of Sara Errani and Roberta Vinci for a spot in the semifinals against the 4th seeded Russians Ekaterina Makarova and Elena Vesnina.