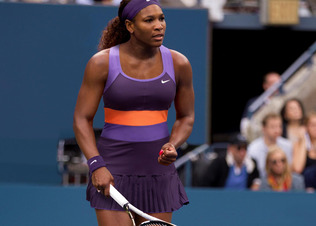 Both of my tennis playing sisters went into the third round on a roll with neither having dropped a set so far in this opening Grand Slam of the year in Melbourne..

Meanwhile Little Sis kept on kicking butt, but had to work for it a little bit.  .She breezed through the first set with Morita, but found herself down 0-3 early in the second set.  She won the next six games with a little help from Morita to take the match in straight sets 6-1, 6-3 to move to the fourth round and her next match with 14th seeded Maria Kirilenko.of Russia.

And for those of you wondering if Caroline Wozniacki is on Serena's side of the bracket, she sure is..  Assuming Wozniacki holds up her end, they would meet in the Australian open semifinals.  But tournament number one seed Victoria Azarenka is on Wozniacki's side of the bracket and will definitely have a say in whether that semifinal match happens.

But Venus' business trip to Melbourne isn't over.  She and Little Sis are seeded number 12 in the doubles bracket  side and still chasing their fifth Australian Open doubles title.
Posted by Monica Roberts at 12:00 AM