Stand Your Ground Law Needs To Die, Not Our Kids 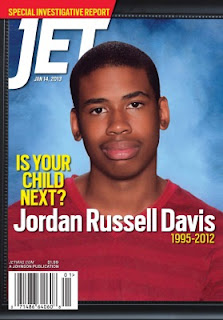 Jet magazine in its nearly six decades of publication has had many prominent African-Americans in the worlds of business, politics, sports and the entertainment world on its covers.

It has had a long proud history of chronicling the inhumanity aimed at our people and especially our children..  Jet published in September 1955 the pictures of Emmitt Till's swollen, disfigured body lying in his open casket during his funeral.   Those photos are credited with galvanizing our community around the Civil Rights Movement and fueling our determination to see it through.

The latest incident in Florida in which a Black teenager died at the hands of a white male assailant now claiming the 'stand your ground' defense is transpiring in Jacksonville, FL.

17 year old Jordan Davis was on his way home minding his own business along with two friends in their SUV outside a Jacksonville gas station November 23 listening to rap music after shopping at the mall during the after Thanksgiving Black Friday sales. 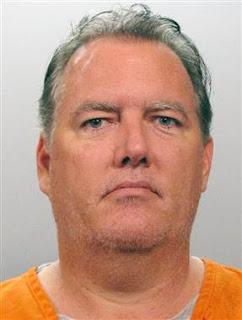 46 year old Michael Dunn parked in the space next to the vehicle along with his fiance Rhonda Rouer to attend a wedding when they stopped at the store to buy a bottle of wine before returning to their hotel.  They parked next to the SUV containing Davis and his three friends as Rouer went into the store to buy wine to take back to their hotel room..

Dunn confronted the teens about their music and demanded they turn it down.   The teens responded by cranking up the volume and according to Dunn's attorney threatened him.   Dunn grabbed his gun out of his glove compartment, claimed he saw a shotgun in the SUV and fired eight to nine shots at the SUV that struck Davis who was sitting in the backseat before driving off.

Police found no weapon in the teen's vehicle and Dunn was arrested a day later, charged and indicted on December 13 for the first degree murder of Jordan Davis.   Dunn of course is hiding behind the 2005 Stand Your Ground law that Florida Governor Rick Scott (R) and his task force claim there's nothing wrong with.

Tell that bull feces to the parents of Trayvon Martin and Jordan Davis.  70% of the people who claimed the Stand Your Ground defense went free despite the fact that in 200 cases that were analyzed by the Tampa Bay Times, the defendants initiated the fight, shot an unarmed person or pursued their victim — and still went free.

And I guess Stand Your Ground doesn't work for Black people.  Marissa Alexander is doing 20 years in a Florida jail because she fired a warning shot at an abusive husband who admitted he has a domestic violence history and threatened to kill her during an altercation.

And bottom line, loud music is no reason to whip out your gun and kill a 17 year old kid.  But as Jason Whitlock correctly stated when he commented on the Belcher-Perkins murder-suicide last month,

"Handguns do not enhance our safety. They exacerbate our flaws, tempt us to escalate arguments, and bait us into embracing confrontation rather than avoiding it."

And as Melissa Harris Perry pointed out, when you're a Black male, being who are is threat enough.

Visit NBCNews.com for breaking news, world news, and news about the economy
It's obvious to everyone but the fetishistic vanillacentric privileged gun sales pimps of the NRA that their Kill A POC Kid With Impunity law has got to go.  Jordan's parents Lucia McBath and Ron Davis now know what Sybrina Fulton and Tracy Martin are going through.   They are vowing to lead the effort to push for federal action to take down the Stand Your Ground Laws in Florida (and 25 other states) that took his life, and we need to join them in that crusade before someone you love is the next victim of it.

The Stand Your Ground Law needs to die, not our kids.
Posted by Monica Roberts at 12:00 PM

hey great stuff, thank you for sharing this very useful information about Stand Your Ground Law Needs To Die, Not Our Kids , Thank you very much post.