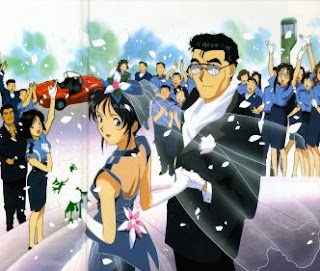 I haven't treated you TransGriot readers to my fiction writing talents in a while and I'm going to do so with an assist from the characters of the anime series You're Under Arrest.

I've written about the show and one character in particular in the person of Sgt. Aoi Futaba, who despite what far too many cis people in anime world mislabel as a crossdresser and misgender her, is undeniably a girl like us.

Aoi in the You're Under Arrest series realistically experiences the issues and emotions we go through as she lives her life and does her job as a Tokyo Metropolitan Police Department officer.

This photo I stumbled across of Miyuki and Ken's wedding gave me an idea for a short story based on Aoi and the You're Under Arrest characters..

Hope you enjoy it.

"Congratulations,  Mr. and Mrs. Nakajima!"
"Thank you, Chief," Ken and Miyuki said in unison as they sat at their bride and groom table in the redecorated Bokuto Station cafeteria where their wedding reception was being held.
"Took them long enough," said Natsumi.
So when are you and Shoji tying the knot, Christmas Cake?"
"I got your Christmas Cake, tramp"
"That's Mrs. Tramp to you, Natsumi." Miyuki said with a mischievous smirk on her face.
"Keep it up Miyuki and I'm taking my wedding gift back."
"That would make you look bad, Ms. Maid of Honor."
As everyone chuckled over the good natured ribbing best friends Miyuki and Natsumi were giving each other, Miyuki noticed Aoi sitting at one of the tables in her bridesmaid dress forlornly picking at her food and gazing at the other couples dancing.  Ken noticed the concern etched on his bride's face when he asked, "What's wrong with Aoi?"
"Yeah, she was fine this morning before the ceremony," said Saori.
I think I know what might be bothering her, thought Miyuki.

"I'll find out," said Yoriko as she turned on her heel with the bridal bouquet in hand and walked in the direction of Aoi's table.
"Kenny, do you have your cell phone?"
"Yeah Miyuki. Why?" he asked as he pulled it out of his tuxedo jacket pocket and handed it over to his wife.