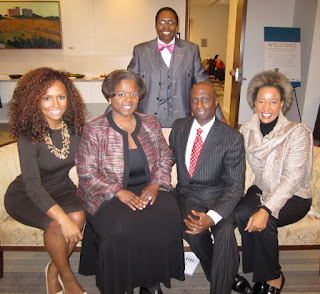 "What does it profit a man to be able to eat at an integrated lunch counter if he doesn't earn enough money to buy a hamburger and a cup of coffee?" Dr. King in a 1968 speech to workers.

I talk often about how trans rights are human rights, and how our struggle at times mirrors the African-American civil rights one of the 50's and 60's

We have seen one of our Holy Grail federal legislative objectives pass in terms of the Byrd-Shepard Hate Crimes law, but have yet to see the Employment and Non Discrimination Act become law.

The National Black Justice Coalition is going to do their part to help address the economic part of the Black LGBT community 'Owning Their Power' by joining forces with the US Small Business Administration to launch the Many Faces, One Dream LGBT economic empowerment tour for communities of color.

“Despite the challenges we face, gay and transgender people represent an untapped segment of aspiring entrepreneurs and business owners,” explains NBJC Executive Director Sharon J. Lettman-Hicks. “Rich with ideas and talent, LGBT men and women are creating and leading their own companies. It’s time to expand the conversation from economic security to economic empowerment. It’s time for us to own our power.”

Janet Mock is one of the National Ambassadors for this tour which will hit 13 cities including my hometown  of Houston.   The others are Atlanta, Brooklyn, Chicago, Detroit, Ft. Lauderdale/Miami, Indianapolis, Los Angeles, New Orleans, Newark, Oakland/San Francisco, Philadelphia and Washington, DC.

"Some claim they don't know any LGBT people of color thriving; others argue that we simply don't exist. The Many Faces. One Dream. tour shatters those assumptions and challenges that invisibility,” says Janet Mock, writer, public speaker and Many Faces. One Dream. National Ambassador. “As a trans woman of color, I'm all too familiar with the fact that my people have been activating at the intersections of many oppressions for far too long, and my goal as a National Ambassador is to unveil the unseen, overlooked, untapped talent that exists in my community."

"This groundbreaking initiative is an exciting continuation of NBJC's ongoing work to empower people at the intersection of the movements for racial justice and LGBT equality," says The Honorable Darryl Moore, Berkeley City Councilman and NBJC Board Chair. "NBJC envisions a world where all people are fully empowered to participate safely and successfully in society, regardless of race, class, gender identity or sexual orientation. Many Faces. One Dream. brings this vision one step closer to being a reality."

For more information, visit nbjc.org/many-faces-one-dream. If you are interested in sponsorship opportunities for Many Faces. One Dream., please contact Michael J. Brewer at sba_tour@nbjc.org or 202-319-1552 x104.