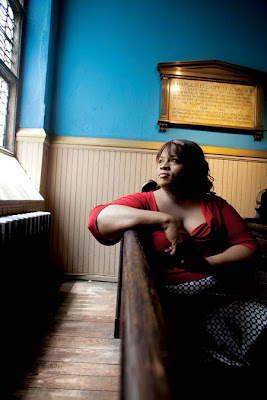 Was stunned and saddened to hear the news from Tona Brown that trans organist T. Desiree Hines passed away January 24 due to the Stage Four neuroendocrine cancer she was bravely battling.

I had the pleasure of having a few long conversations with her, and when I last checked in with Desiree she had moved to Kansas City, MO, was playing the organ at Grace and Holy Trinity Episcopal Cathedral and had started her studies at the Conservatory of Music at the University of Missouri-Kansas City.

Before moving to Kansas City she was a well known fixture in the Philadelphia TBLG community.  But mere months into her KC stay she received the devastating medical news last March.

Despite that the Jackson, MS native stayed upbeat about her situation and fought it tooth and nail despite the long odds until the end.

"When I'm sick, it affects me. But it is actually given me a better outlook on life, more drive to be a better person, a better musician," Hines said.

Rest in Peace Desiree.   Heaven just picked up one heck of an organist.   You will be missed.
Posted by Monica Roberts at 7:15 AM