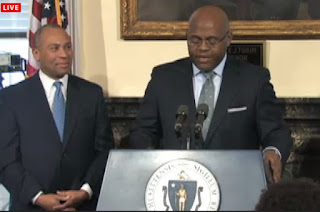 With the confirmation of Sen John F. Kerry to become the next Secretary of State, his now empty Senate seat had to be filled by an appointment until the state of Massachusetts can elect his replacement.

After considering former Rep. Barney Frank for it, Gov Deval Patrick (D) appointed his former chief of staff  William 'Mo' Cowan to hold the seat until the election is held June 25


"Mo Cowan has been a trusted adviser, and professional colleague and friend for a very long time," Patrick said at a press conference at the Statehouse Wednesday. He lauded Cowan's law background and experience in the administration, in which Cowan has served since 2009.

Cowan unfortunately will not be a candidate in the special election to succeed Kerry, but reassured his new constituents that he will head to Washington "ever mindful of what matters to the people of Massachusetts." He noted jobs, education and affordable health care as top priorities for state voters.

By selecting him, Cowan made a little congressional and Black history.    He is the not only the second African-American US senator from Massachusetts after Republican Edward Brooke who served from 1967-1979, he is the first Democratic senator who hails from a state other than Illinois.

All three previous Democratic senators, Carol Moseley-Braun, Barack Obama, and Roland Burris all were residents of the Land of Lincoln.  .

Interestingly enough, with this appointment following South Carolina Gov Nikki Haley's (R) appointment of Tim Scott (R) to fill the remaining term of the resigned Jim DeMint, this is the first time ever in US history that we have had more than one African-American senator serving in the US senate during the same congress.