Danielle Adams prophetically called it in a Thursday night YouTube video, then dropped 30 points to ensure her prediction came true as the Texas A&M Aggies won the 2011 NCAA women's title over Notre Dame 76-70.

With the win Texas A&M ended the best season in school history with a 33-5 record and became the fourth Texas based school after Texas (1986), Texas Tech (1993) and Baylor (2005) to bring an NCAA women's basketball title back to the Lone Star State 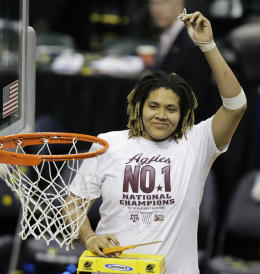 Yes people, we do play sports other than football and spring football here.

After last night's bricklaying convention at Reliant Stadium, it was nice to see a game where people actually hit midrange jumpers and play defense.  Both teams played hard with Skylar Diggins dropping 23 points for the Irish but a clutch Tyra White three pointer would swell the Aggie lead to 73-68.  A defensive stop by the Aggies on the next Notre Dame possession ensured that the NCAA championship trophy would be coming back to Texas.

In addition Aggie coach Gary Blair made a little history as well.   He becomes the oldest coach at age 65 to snag an NCAA women's title.


They're probably still partying in Bryan-College Station right now and at Aggieland.