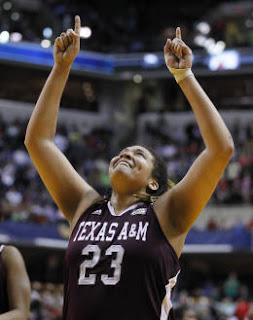 Had to show some love to my Texas A&M family as their lady ballers are playing in tonight's NCAA women's title game in Indianapolis.

As they've made this run through the season I've smiled at times.   It goes back to my recent speaking engagement at Aggieland a few months ago and a conversation I was having with several of the female students about women's basketball.

One student decried the sexist way it was promoted, and to emphasize her point she pulled up the Aggies women's basketball website and used as Exhibit A the glammed up photo of the 2010-11 Aggie women's team on the front page, then compared it to the men's squad.

Was a nice photo, but back to the story. 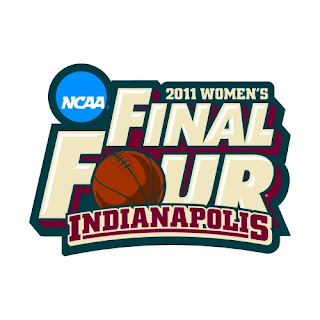 The Aggies are in their first NCAA Final Four and NCAA Championship game, and they want to complete their mission of bringing the title back to the Lone Star State.


Danielle Adams did say in a YouTube video posted after the Aggies arrival in Indy Thursday night "We're winning it all right here,"  alluding to the fact this was the school's first women's Final Four appearance.

So far so good.


The Aggies knocked off their season long nemesis in Brittney Griner and the Baylor Lady Bears in the Dallas Regional final after three frustrating losses to them in Big 12 play and in the Big 12 tournament championship game.   Despite being a number two seed in the Dallas Region, it was considered an upset when they beat the Ogwumike sisters (ahem from Houston) powered Spokane Region champ Stanford 63-62 in a Sunday night thriller. 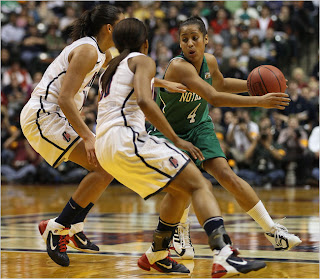 Now they take on the 'home' team in Notre Dame, who had a similar frustrating situation with UConn.   To set up that fourth meeting with Maya Moore and the Huskies, they had to go through number one seeded Tennessee in the Dayton Region final.

South Bend, IN homegirl Skylar Diggins lit up UConn for 28 points to not only avenge their three straight losses this season to the Huskies, but ended their bid for a threepeat with a 72-63 thumping on home state soil..


It's shaping up to be an interesting matchup between the Aggies and the Fighting Irish, and y'all know who I'm rooting for.