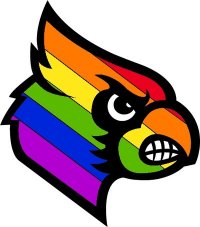 Two student-led LGBT projects were the first recipients of Diane Rigney Student Activism grants, awarded by the Office for LGBT Services this week.

Emory Williamson will use funds to start a new campus group for heterosexual allies in LGBT work, Straight Against Hate. This group will partner with others on campus and in the Louisville community to champion issues and collaborate with LGBT students.

Grace Howard and Lindsey Ferguson will create a campaign to educate the U of L community about discriminatory practices at Red Cross blood drives, especially the lifetime ban on giving blood by men who have had a male sexual partner. Ferguson is excited to be one of the first recipients of a grant. "A lot of people don't know the inequalities that exist within the FDA's laws on who is able to donate blood. By becoming recipients of the Diane Rigney Student Activism Grant, Grace and I will be able to educate the general student population; that, in itself, will be rewarding."

This is the first year for the grant program, made possible by the generous donation from social justice activist and U of L alumnus Diane Rigney.

Rigney is a lifetime civil rights activist who participated in many social justice events throughout her life, including marching for civil rights in Birmingham and Selma, Alabama in the 1960s and advocating for domestic partner benefits in the company where she served as a senior vice-president for human resources.

The program provides undergraduate students with money to implement their ideas and a mentor experienced in social justice activism. The mentor will provide valuable coaching and feedback to make the project a learning experience. Throughout the process, from developing the grant proposal to evaluating the success of the project, students will learn what it takes to be active in social justice efforts and make a lasting change in their community.

Labels: Kentucky, Louisville, U of L