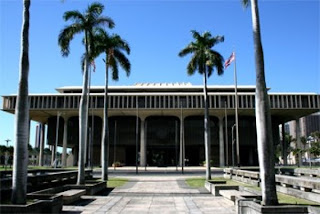 I mentioned HB 546 in a previous TransGriot post.   It's a bill that would ban trans workplace discrimination in Hawaii and had passed in the Senate Judiciary Committee on a 3-2 vote.

Well, it did much better once it got to the Senate floor.    The Hawaii Senate passed HB 546 on a 22-2 vote.   It already passed in the Hawaii House by a similarly lopsided 42-4 margin.

The good news is that unlike the previous GOP governor, Gov. Neil Abercrombie (D) is expected to sign it.
Posted by Monica Roberts at 8:00 AM

Three cheers to the Aloha state. Maryland should take note.