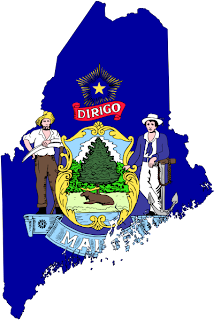 If you're questioning why I've been part of the team fighting that jacked up HB 235 bill in Maryland, peep this unjust bill that is percolating in Maine.

It's a bill written by freshman Republican Rep. Ken Fredette (big shock) in reaction to a Maine Commission on Human Rights decision favoring a transchild.     This LD 1046 bill seeks to amend the Maine Human Rights Act by adding this paragraph at the end of it.

Note to EQMD, Morgan Meneses Sheets and all you trans sellouts taking shots at me and the folks pointing out the fatal flaw in your moldy trans half a civil rights loaf in various net venues.   This kind of crap is fracking why public accomodations language in a civil rights bill matters.   Without P/A language, it's a waste of time, money and energy to even pursue penalties against someone who discrimates against you.

But if you were a POC who has had to deal with being in a marginalized body from birth and at times has to use the court system to enforce their civil rights, you would know that.

Okay, now that I'm done venting at the Civil Rights Clueless Clique for now, back to the more important 'bidness' of pimp slapping this proposed Maine Madness.

We do have some Maine based transpeople planning to testify at the Judiciary Committee hearing scheduled next week against this flawed bathroom bill that needs to die.

You know the TransGriot will keep you posted on this unjust bill as well.