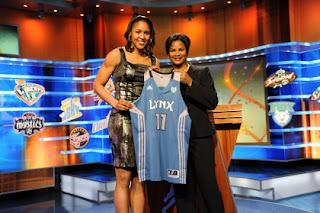 Lost in the blizzard of news I've been covering this month was the WNBA draft.   Now that they've hired a new president for the league, I'm somewhat ready to forgive them for screwing my Comets since Donna Orender resigned in December.

And who was the WNBA's overall number one pick in the draft.   Give you one guess who it was, and UConn Huskie fans can probably tell you.

Yep, it was UConn's Maya Moore, .who will be spending her WNBA summers when she's not playing for Team USA next summer in London playing for the Minnesota Lynx.