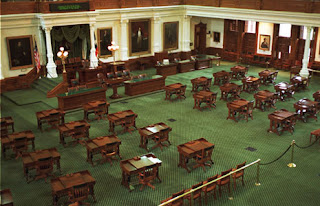 The Texas Senate adjourned for the day without taking up the issue of SB 723.    We have been granted another day to send e-mails and call our Democratic state senators.   When you do so, ask them to hang together to oppose SB 723 which has passed out of committee and is on the Senate intent calendar.

And just in case you're wondering, the Texas legislative session doesn't end until May 30.
.

The GOP has a 19-12 edge in the chamber, and Republicans only need one of the Democrats to get the 2/3rds number of senators they need to bring up the bill.    We need them to stand up and say NO as a group.


Keep those calls and e-mails coming.   Let them know that we want them to oppose SB 723.    Allies and supporters, this is one of those times we need your help as well.