'The Game' Renewed By BET For Fifth Season 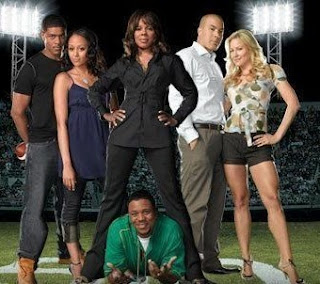 As I've mentioned in a few posts, I love the Mara Brock Akil produced show The Game which is a spinoff of Girlfriends.

Melanie Barnett-Davis, Tia Mowry's character on the show is a first cousin to Girlfriends Joan Clayton and her character was originally introduced on that show.

Oh yeah, speaking of Girlfriends, didn't appreciate the stank way it was dismissed after eight years on the air.  Word from Mara Brock Akil is that if we show the same kind of support for Girlfriends that was shown for the Game, there's a possibility Girlfriends could be resurrected as a series or even a movie.

But back to The Game.

It was recently made official to no one's surprise that The Game has been renewed for a fifth season with a full 22 episode run that will start in January 2012.

I say not surprising because ever since the show was picked up by BET, it has thrived.   The opening episode drew 7.7 million viewers and although that fell off to a steady 3-4 million viewers and it only had a 13 episode run, those are still impressive numbers for a cable network.

Those numbers also positively impacted the show that follows it on BET, Let's Stay Together, which debuted with 4 million people watching it.   It managed to get  2 million viewers tuning it and was also renewed for another season with 22 episodes as well.

The fans of The Game, who waged a successful three year campaign to get the show back on the air after its 2009 cancellation on the CW after its third season, have expressed the desire to the show's producers to have those episodes in the Season 5 be hour long ones.

We'll see if they hear us on this one.

Posted by Monica Roberts at 4:05 PM