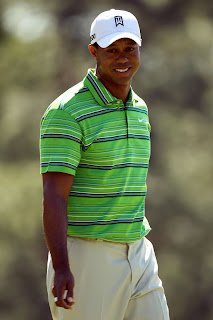 Needed a break from the Net and the drama surrounding the federal government shutdown and HB 235, so I found myself tuning in to the second round coverage of the 2011 Masters.

While scarfing down my Blue Bell I tuned in just in time to see Tiger Woods surge from being at even par for the day to closing to three shots off the lead while shooting a 66.  In the process he looked like he was starting to hit the types of shots he routinely used to make when he was the world's number one golfer for the last 10 years.

There's 36 more holes of golf to be played at Augusta national, and the question on mine and every other sports fans mind as we go into this weekend will be 'Is Tiger Back?'

Since he came back from his drama a year ago he's shown flashes of the old Tiger, but faded in later rounds.   I would like to see him break Jack Nicklaus' record for major tournament wins since he's only two tournaments wins from tying it.  I'd also like to see him start winning tournaments again, be it a major or a PGA tour one.

As to whether he's back and finally sorted out the issues that have plagued his golf game, we'll find out in a few hours as the third round of The Masters gets underway.