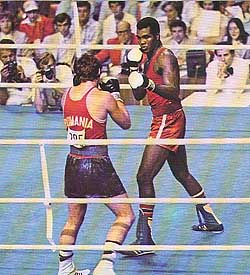 I've been aware that there were people of African descent that spoke Spanish, French and Portuguese for a long time.

I knew about Haiti's history as the first Black republic, that Mariah Carey's father was a Black Venezuelan, had Panamanian friends who are proud of their Black and Latin heritage, and was intrigued to discover after watching coverage of an NABJ convention panel discussion about Hurricane Katrina on C-SPAN CNN journalist Soledad O'Brien has an Afro-Cuban mother.   I also wrote posts that talks about Mexican president Vicente Guerrero and his African heritage and about Black  Latinas.

My fascination with it was triggered by the 1972 Munich Olympic Games.    I was watching the boxing competition with my father and the match that was on ABC was an early round one involving the great Teofilo Stevenson, who was about to start his run of microwave beatdowns enroute to the gold medal.

When I remarked to my dad while watching the Stevenson match that I wasn't aware there were brothers and sisters in Cuba, my dad said in a matter of fact tone,"the slave ships stopped in Cuba, too." 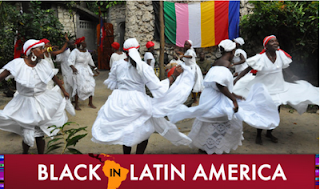 Yep, they did.    Out of the 11.5 million Africans who survived the brutal Middle Passage across the Atlantic Ocean and ended up in the Western Hemisphere, only 450,000 arrived in the United States.   Brazil received ten times that number.    Africans also arrived in Peru, Mexico, Cuba, Haiti and the Dominican Republic.

Renee talked about it on her blog, but I'm looking forward to the latest PBS special courtesy of Dr. Henry Louis 'Skip' Gates entitled Black In Latin America.    The four hour series will explore race and identity issues in Latin America.

The shows will cover the following topics:

I'm looking forward to watching this PBS series that starts at 8 PM EDT on your local PBS stations and getting my learn on..
.