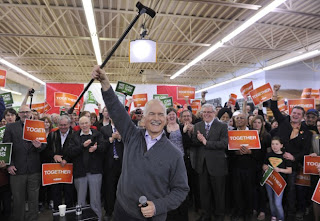 In what may be a good sign for the Canadian center-left parties such as the NDP and the Liberals , the early voting saw more than 2 million Canadians take advantage of the three day period of advance polling with the May 2 election just five agonizing days away.

In the 2008 Canadian federal elections 1,528,780 people voted early in an election that saw the lowest voter turnout in Canadian history at 58.8 %.

With polls showing the NDP on a historic rise that puts them first in Quebec and second nationally, if it holds they may end up becoming the Official Opposition or if they catch a few breaks may garner enough seats to have Jack Layton become Canada's new prime minister.

Alarmed by the NDP surge, the leaders of the Bloc Quebecois, Liberals and Conservatives have stopped training their rhetorical fire on each other and turned it on the NDP.

NDP Leader Jack Layton noted at a recent campaign event in Winnipeg, "Now, the old parties are spending the last week on the attack, hoping to drown out the voices for change in Canada."

"Well, in the final days of this campaign, New Democrats will launch a few attacks of our own. My friends, I will attack health-care wait times. I will attack doctor shortages. I will attack seniors' poverty. I will tackle the crisis in retirement security."

Too bad there isn't one more debate on the horizon...The last two were fun to watch.

May 2 is going to be a very interesting and potentially historic day in Canada if the NDP surge continues, and Madame Political Junkie will be watching every minute of it..