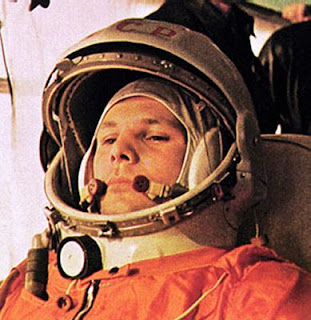 April 12 is also a noteworthy day in history for another event that all us space junkies are aware of.

50 years ago today Cosmonaut Yuri Gagarin became the first human being launched into space aboard the Vostok 1 spacecraft.   He orbited Earth once and returned one hour and 48 minutes later as an international hero.

It didn't happen for the United States until NASA launched astronaut Alan Shepard, our first American man in space,  on a suborbital May 5 flight from Cape Canaveral, FL..

It was Gagarin's only spaceflight, and he tragically died in a MiG 15 plane crash in 1968 at age 34.   But since then countless men and women from various nations have followed him into the Final Frontier.