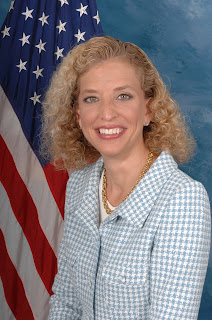 I've always loved 44 year old Rep Debbie Wasserman-Schultz (D-FL).  She's a kick azz liberal progressive who is a passionate advocate for issues of importance to us.   She's a frequent telegenic presence on the talk show and TV pundit circuit and isn't 'scurred' to call the conservafools out on their BS.

President Obama tapped her yesterday to become the head of the Democratic National Committee in the wake of Tim Kaine's decision to run for the US Senate seat of retiring Democratic senator James Webb of Virginia next year.

Rep Wasserman-Schultz will hold on to her Florida 20th Congressional District seat while tackling her new role as the DNC chair.

"As we look toward 2012 in particular, I'm going to be working hard every day to guarantee that President Obama and Democratic candidates up and down the ballot are in the best position to win their races," Wasserman-Schultz said in a statement released Tuesday. "That was my promise to the President and that will be my promise to every single Democrat across the country."

Alright!  the only news that would have made me happier is if he'd put Alan Grayson in that DNC chair.