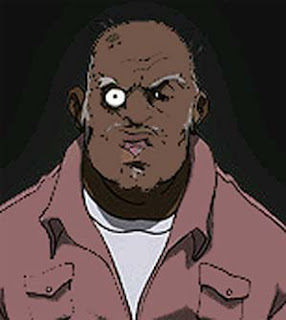 I'm a huge fan of Aaron McGruder's cartoon 'The Boondocks' (which doesn't appear in my local paper The Courier-Journal for some strange reason). I have the first two seasons of the Boondocks DVD happily parked by my TV and own two of the Boondocks books.

He started on the TV show, but has now migrated to the strip. There's a character called Uncle Ruckus, who is the embodiment of all self-hating sellout blacks.

But you don't have to believe me. Watch the video montage of Uncle Ruckus.

And oh yeah, video is questionable for work environment and has language issues.


Every time I see Uncle Ruckus, it reminds me of all those Oreo-cookie chomping Stepford Negroes falling all over themselves to appear on Faux News and elsewhere to look and act more conservative than thou.

And screwing their people in the process. 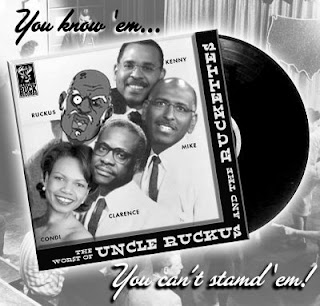 Actually, the comic strip of The Boondocks is no longer in production any more. You can read it online, or have a daily strip e-mailed to you, at http://www.gocomics.com/boondocks.