The Prez Is Right-We AREN'T A Christian Nation 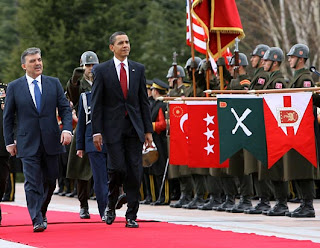 The Religious Reich got their panties all in a bunch when President Obama stated during his recent European trip that the US isn't a Christian nation.

The First Amendment to the US Constitution states, 'Congress shall make no law respecting an establishment of religion, or prohibiting the free exercise thereof; or abridging the freedom of speech, or of the press; or the right of the people peaceably to assemble, and to petition the Government for a redress of grievances.'

That's part of the Bill of Rights for the Christoilliterate in the blogosphere. What that means is that peeps have the right to worship as they please and the government cannot establish an official state religion.

We have people of many faith in this country, including folks for whatever reason don't care to follow any religious teachings.

But to blow up the 'Christian nation' fallacy, peep this language from the 1797 Treaty of Tripoli.

Article 11 of this treaty states; 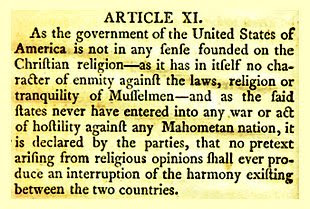 Art. 11. As the Government of the United States of America is not, in any sense, founded on the Christian religion; as it has in itself no character of enmity against the laws, religion, or tranquillity, of Mussulmen; and, as the said States never entered into any war, or act of hostility against any Mahometan nation, it is declared by the parties, that no pretext arising from religious opinions, shall ever produce an interruption of the harmony existing between the two countries.

Translation, the intent of the Founding Fathers was quite clear in this treaty, though only in force for a few years, that "the government of the United States is not, in any sense, founded on the Christian religion."

This reassurance to Islam was written under Washington's presidency, and approved by the Senate under John Adams.

But I'll let the President speak for himself. Here's what candidate Obama said last year.

So the Christobigots need to stop telling the lie that 'we are a Christian nation'. The way they practice their right-wing version of it makes it blasphemous to even part their lips to say it.
Posted by Monica Roberts at 11:13 AM