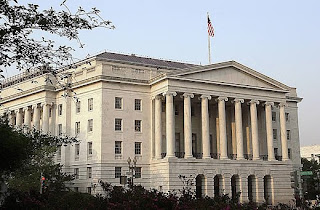 The heavy drenching rain ending Day 1 gave way to a beautiful clear, cool and sunny May 6 day in Washington.

After emerging from the Capitol South Metro station Polar and I arrived on the Hill and headed straight to the Longworth HOB cafeteria after dropping off some promised information packets to the offices I'd visited the previous day. I'd finally picked them up during our initial strategy meeting the night before.

My task was simple. I had the mission of hitting as many CBC offices as possible and I was going to have to do it with a rookie lobbyist in tow. Since I knew it was going to be next to impossible for me to cover all 43 offices in the limited amount of time I had, I just decided on the train ride in to hit CBC leadership and whatever offices I passed in the various House Office Buildings along the way. 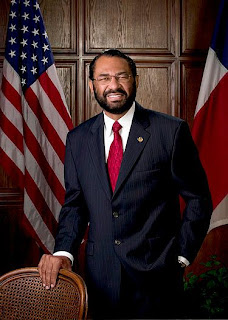 We arrived in the cafeteria and waited to hook up with Ness and the rest of our party. Since we had two newbies, we decided to take 'errbody' as a group to Rep. Al Green's (D-TX) office to give them an idea of what and how to do it.

On the way there I started my training by explaining to my partner Ro some of the basics. Lobbying is more than just advocating yes or no for a bill and asking for its passage. You have to engage your active and passive listening skills in addition to your powers of observation. You have to build personal relationships. It's calling upon your lifetime accumulated knowledge base. It's having a good working grasp of civics and government and how it works.

Passion and idealism is fine and an excellent starting point, but it must be balanced with discerning 'the art of the politically possible'.

If you're planning on lobbying Congress or any governmental body on behalf of this community, one thing that must end is your detachment to politics or the news. You cannot be willfully politically ignorant and be an effective lobbyist.

Watching CNN, C-SPAN, MSNBC, FOX (to know what The Enemy is up to) The Hill newspaper/website is a must and reading various newspapers becomes necessary as well.

You must also acquire a broad based knowledge as to what's transpiring in the transgender community so that you can converse intelligently and authoritatively about it. You never know if you'll be called on in an office or to give bill testimony about a hate crime that happened in California, a discrimination case that occurred in Texas, a police beatdown in Tennessee or an ID case in Illinois.

We arrived at the office a few moments later in the Rayburn building. One thing I also noted is that the CBC members, now reflecting the increased clout of seniority and the important leadership roles many have in the 110th Congress aren't clustered in the Cannon HOB. They now have offices in the Rayburn and Longworth buildings where the House power players are.

While Ness was talking to the LA in Rep. Green's office, I poked my head in to see his Chief of Staff Jacqueline Ellis. The last time I was there in 2007 she was catching hell on the phone from a local minister who was expressing in not so Christian terms his opposition to the hate crimes bill. We had a wonderful conversation in the aftermath of that.

When I poked my head in, I said to her "I see you aren't getting screamed at on the phone today." She looked up, saw my smiling face and gave me a big hug as we talked for a few minutes about the office move. 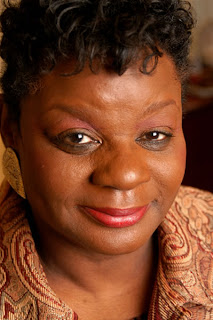 I stopped in Rep. Bobby Scott's (D-VA) office, and had wonderful conversations in Rep. Keith Ellison's (D-MN) and Rep. Gwen Moore's (D-WI) offices. I advised Rep. Moore's LA about the Sierra Broussard discrimination lawsuit that's about to kick off in Appleton, WI. I also asked them to convey my appreciation for their hate crime votes and hoped they would do the same for ENDA.

I ended up cutting my day short because my partner had finals to study for. After dropping off some promised information packets in a few offices I'd visited the previous day, it was off to the Capitol South Metro station and dinner at a Fuddruckers near our hotel. I haven't eaten at one since I moved from Houston and I was eagerly awaiting to opportunity to chow down there once again.

Two days down, one to go.
Posted by Monica Roberts at 1:22 AM