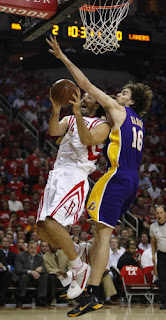 Told you my Rockets weren't going to be a pushover for the LA Fakers.

I got my birthday win in Game 1 from my Houston homeboys. When every NBA pundit was predicting the Rockets were done after Yao Ming went down with a foot injury in the Game 3 108-94 loss and took a 40 point La La land beatdown in Game 5, Clutch City 2K9 version came up big in Game 6.

Aaron Brooks and Luis Scola combined for 50 points as my Rockets beat the Lakers 95-80 in Toyota Center to force a decisive Game 7 on Sunday in Los Angeles.

The Rockets have lost Tracy McGrady during the season, Dikembe Mutombo in the Portland series and Yao Ming in this one and still they rise. Winner gets the Denver Nuggets in the NBA Western Conference Finals.