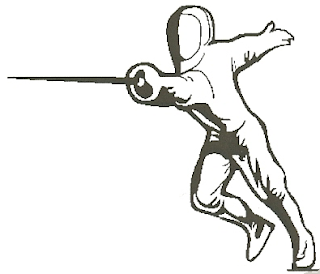 I was talking to Dawn about a recent fencing tournament in Indianapolis she competed in that I couldn't attend. When she gave me the 411 about what happened at it, she also surprised me by telling me a few of her fellow fencers were looking for me.

Now for the most part I'm there at those tournaments to support her in addition to being fun to watch. Since that's her world, I try to stay in the background and let her be the center of attention in it. I've had some wonderful conversations with many of the peeps in the Great Lakes fencing region, the Veterans 40 and veterans 50 fencers, and various officials.

I've done stuff like babysat toddlers so their mom could compete on the fencing strip, been in the cheering section for other KY division/Vet fencers, and even volunteered to help at an LFC Pirates of the Caribbean themed Halloween party. I guess in the process I built up some goodwill among the fencing community.

Sometimes I find it incredible when I discover just how much of a footprint I leave in the various worlds I interact with. I was mildly shocked to find out from a Cleveland based flight attendant who remembered me from my CSR and ASA supervisor days in Houston while flying on a Continental trip back home. It was my first trip on the airline since we parted ways and I was flying back to Da Ville from speaking at last year's Trans Pride March.

Even though it had been seven years since I'd worn a CAL uniform at the IAH gates, she told me just how much I was missed by the Inflight crews across the system. The same thing has been reported to me by former IAH co-workers as well, who ask my homegirl Quinn how I'm doing and send messages through her as to how much they miss me.

Some of you may be amazed I feel this way, but I'm shocked sometimes at just how much love I get from peeps just for simply being me.

All I'm trying to do is simply treat people with the respect and dignity that they want to be treated with, listen to them when they have something to get off their chests, and be a loyal and supportive friend to all I'm blessed to have in my life.
Posted by Monica Roberts at 11:05 PM