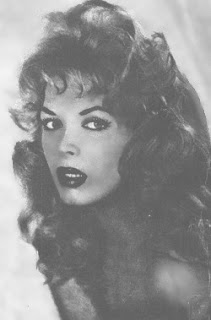 Since I mentioned Coccinelle in a previous post, I thought it was only fair that you get to know who Jacqueline-Charlotte Dufresnoy was.

She was born in Paris on August 23, 1931. Her petite 5'3" frame and slight build led to many people questioning her gender identity. She was also aware of her gender issues at age 4 and began taking hormones in 1952. 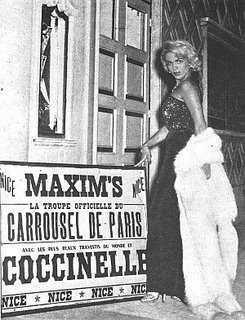 She dyed her brunette hair blonde and later joined transgender showgirls April Ashley of Great Britain and Amanda Lear as a regular at the famed Le Carrousel de Paris nightclub as her popularity continued to increase.

Coccinelle usually arrived on stage wearing scarlet lipstick and wearing one of a number of outrageous mink coats dyed in different colors.

She'd already had rhinoplasty to further feminize her features, and in 1958 she traveled to Morocco and became the first European transwoman to undergo vaginoplasty by pioneering Casablanca based SRS surgeon Dr. Georges Burou.

When she returned to France, she became a media sensation like Christine Jorgenson several years before. She then remixed her look and her stage act to match the prominent sex symbols of that time period, Marilyn Monroe and Brigitte Bardot.

In addition to her new sexy image, she became appearing in various movies such as 1959's Europa di notte by director Alessandro Blasetti. More films followed, and she became the first French transwoman to become a major star in 1963 when she starred in a revue entitled 'Cherchez la femme' at the famed Paris Olympic Theater.

Coccinelle was a trailblazer and an iconic figure to transpeople who grew up in the 50's and 60's. After her operation France modified its laws to allow details on birth certificates to be amended following SRS, and she duly changed her name to Jacqueline-Charlotte from Jacques-Charles.

She also worked extensively as an activist on behalf of French transgender people, founding the organization Devenir Femme (To Become Woman). Devenir Femme was designed to provide emotional and practical support for persons seeking sex reassignment surgery. She also helped establish the Center for Aid, Research, and Information for Transsexuality and Gender Identity as well.

She was married three times, and her first marriage to sports journalist Francis Bonnet in 1960 not only was the first transsexual union to be officially acknowledged by the nation of France, she booked Notre Dame Cathedral for the ceremony. It also established a transgender person's legal right to marry in France. 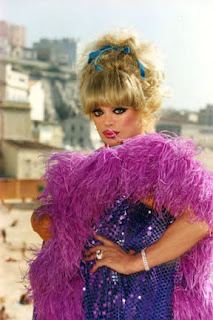 Coccinelle toured the world for 25 years, and was a big hit in South America. Bob Hope was impressed by her show and offered her a tempting financial package to perform with his troupe, but she declined it. She even performed in front of the Shah of Iran and for 10 years appeared in a German cabaret run by transwoman Romy Haag. Her autobiography, Coccinelle by Coccinelle, was published in 1987 with her last public performance being done in 1990.

At her funeral, held at the Eglise Saint-Roch de Paris, Father Philippe Desgens reminded mourners: "All the children of God have a place in the Church", and noted that "by her marriage in church after her operation, and during her whole life, Coccinelle showed her faith."

Coccinelle is another of our iconic transwomen who will never be forgotten, and blazed a path that future French transwomen would follow.
Posted by Monica Roberts at 8:00 PM