It's Friday, and that means it's time for another episode of the 'Shut Up Fool! awards. As the birthday boy stated, 'fools are everywhere' and we take the time to find them and shine a bright spotlight on them.

So it's time to cut out the jibber jabber and see what person (or persons) gets the honor of being the fool of the week.

For his virtuoso performance last week on the Notre Dame campus, I just have to give it up to perennial sellout negro Alan Keyes. He's also in the running for a Shut Up Fool! Lifetime Achievement Award. 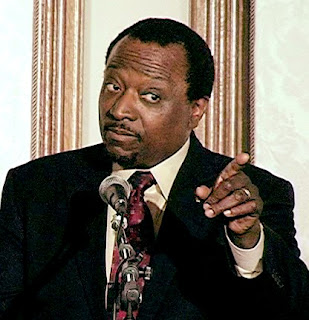 When he couldn't get elected to dog catcher in Maryland, much less to any public office in the state he carpetbagged his way to Chicago for the IL US senate election versus the future prez.

He got his butt kicked by a 3-1 margin with Obama piling up 3 million votes despite being outspent 2-1 by Keyes. It was a US senate campaign in which Keyes called him a "radical communist" and said a vote for Obama was a "vote for Satan."

So yeah, there's no love lost between the two.

He's also one of the conservawackos who is still in GOP Fantasy Land questioning the prez's US citizenship, and last week he accused the prez of 'prostituting' Notre Dame

I have zero respect for a sellout and hypocrite whose 'family values' drove him to kick his own daughter out of his house and cut off funding for her college education when Maya Keyes publicly declared she was a lesbian.

Sounds like the accusation you spat at President Obama about 'Rejecting God's fundamental law of love. . ." applies more to you.

President Obama is a light years better man than you ever will be.