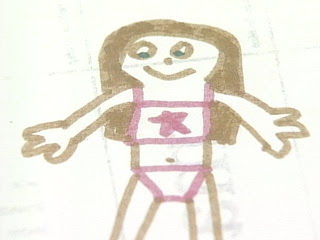 As much as I loved growing up in the 60's and 70's, I would have loved even more to have been given an opportunity to grow up as a female during my school years.

I think about that every time I see the stories of the brave parents of transgender kids who allow them to transition early in life so that when they get to adulthood won't have as much baggage to carry into it.

I've been following the story about the Omaha, NE parents who are allowing their 8 year old child Kate to begin living full time as a girl in the fall.

“It was not a decision that was made rashly at all. It was a decision to protect her psyche and her self-esteem,” the mother said. “She’s been a girl since the beginning, everything about her, the way she dances and skips around and the things she’s attracted to. It’s more than toys and clothes.”

The mother said Kate has consistently asked to be called a girl since she was 4 years old and even said something that's all to familiar to many of us in the transgender community, what we call the 'Transgender Child's Prayer'.

“One night, she said ‘Every night when I go to bed, I pray my inside will match my outside. But it never happens,'" the mother said, recalling the words of her middle child.

Kate said about her situation, “It’s kind of like you’re trapped somewhere and you can’t get out.”

Here's where the anti-transgender chickens that Dr. Paul McHugh spread at the Vatican have roosted in someone's life. The mother is a lifelong Catholic and wanted to continue her child's education at a local Catholic school, but the archdiocese of Omaha, following the transhating policies of the Roman Catholic Church, refused to allow Kate to begin third grade as a female.

So Kate will begin third grade not in the school she's been at since kindergarten, but in a public school this fall.

When her mother announced that Kate would be allowed to pierce her ears next week, the girl screeched and had a huge smile on her face.

“You’ve waited long enough to live as a girl,” the mother said.

Kate's mother is on a mission to educate the community and encourage churches to open a dialog about diversity and acceptance of all people.

“Just take the time to listen. It is different. It’s something most people have never heard of, but it doesn’t make it scary or pathological,” she said.

Hello Catholic Church, Religious Reich, and transhaters, are you listening?
Posted by Monica Roberts at 1:10 PM

Hi Monica, what happened to your Intense Debate comment thingie?

Anyway, I just wanted to say that it makes me feel so hopeful and positive when I hear of such wonderful parents :)

It's nice to hear such a positive story. More parents should be like this. Thanks for sharing this.