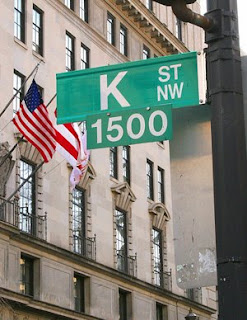 I've spent the last three days post birthday exercising my constitutional right to petitioning my legislators for 'redress of grievances'.

Lobbying isn't just for high priced hired guns operating out of K Street offices, anyone can do it. Besides, I get the additional benefit of being in a large city once again, and a 9 hour drive from Louisville to Washington to boot.

We hit the road after stopping by a post office to drop off my mom and sister's Mother's Day cards. After a lovely drive down I-64 dodging showers through eastern Kentucky, the mountains of West Virginia, crossing the Virginia border and up and down I-81 and I-66 past several Civil War battlefields, Polar and I arrived at our hotel in Fairfax, VA a little after 9:30 PM EDT.

I found it a little amusing and inspiring that our hotel room had pictures of the Declaration of Independence and Thomas Jefferson on the wall. We also flipped it on the local news after grabbing a bite to eat and grabbing some supplies.

We watched the fireworks erupting over the 12-1 DC City council vote to recognize same gender marriages performed in other states. We discussed the irony of Marion Barry being the lone no vote as we watched the bigoted Black minsters show their anuses as well. 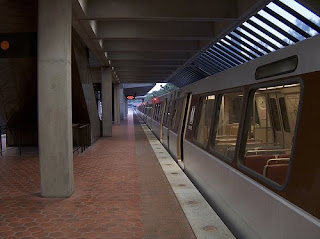 Polar and I beat 'errbody to DC, so we decided Wednesday morning (May 6) not to do any sightseeing and just get the lobbying party started since I had the daunting task of trying to hit as many of the 43 CBC offices as possible.

We clambered aboard the bus for our trip to the Vienna Metro Rail station. One of the reasons Polar chose that hotel was its proximity to the Washington Metro Orange line. Finding parking in the capital, much less battling it on the various freeways in and around the Washington area including the infamous Capital Beltway is a pain in the rear. Even though we had a longer commute in, we didn't have to change trains.

So our first stop was to see our own congressmember John Yarmuth (D-KY). He's a much busier guy on the Hill this session and he wasn't in. We'd just run into him at the local ACLU dinner a few weeks ago anyway and were paying our respects. 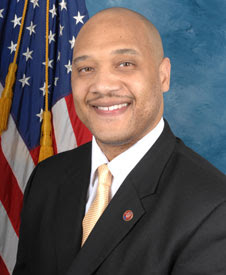 So we bounced over to see Andre Carson (D-IN). Although I am thoroughly pleased by my current Congressional representation, Andre being the rep for Indianapolis is my closest CBC rep. He's also the grandson of the late Julia Carson, who represented the area for ten years.

I always get to talk to at least one living breathing US congressmember, and this time it was Andre. I got to thank him and his staffers personally for his support of HR 1913 and for the piece he wrote on The Bilerico Project in support of GLBT rights. They were also pleased to discover that I was a contributing writer to the Project as well. 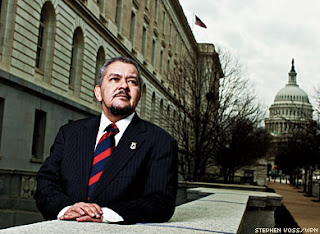 After that, it was off to Barney Frank's (D-MA) office to fulfill a promise I made to shake Diego Sanchez's hand. He was happy to see us and took a few moments out of his busy schedule to outline some of the issues of importance to the community he was working on as well as the constituents in the district.

I popped into Sheila Jackson-Lee's office to pay my respects to her. She'd sent me greetings through Vanessa Edwards Foster when Ness ran into her in Austin doing some lobbying back home. She wasn't in, but I did express my thanks to her staffer for her positive vote on HR 1913. 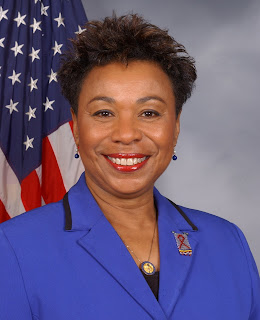 I ended the day with a stop at Rep. Barbara Lee's (D-CA) office. I'd visited it during my 2007 trip to DC and wanted to congratulate her on becoming the new chair of the Congressional Black Caucus. Had a nice chat with her chief of staff and asked him to convey mine and the transgender community's appreciation for being a ally standing up for the transgender community.

It was getting close to our planned 4 PM meeting in the Longworth cafeteria with the rest of our intrepid lobbying team, so it was time to bounce. We kiled some time checking out the new Capitol visitors center, looking at the Supreme Court building and musing about who the president was going to nominate for the soon to be vacated seat of Justice Souter. I ended the day not only getting reunited with my Houston homegirl, but meeting Toni, Ro, and Rebekah as well.

We shoved off after the planning meeting to the Dupont Circle area for dinner. After a few hours of lively conversation about the past, present and future state of the transgender community, Polar and I had to call it a night in order to get back to hotel before the last train to our station stopped running along with the bus we'd have to catch to get there.

We did have some technical difficulties. We discovered the difference between the Green 1 and Green 2 bus routes as we left the rail station and endured a long winding bus tour through Fairfax and the George Mason University Fairfax campus. Just as we stepped off the bus in front of the hotel the skies opened up and we got drenched in a deluge.

But despite the detour, the first day we could consider a success. We'd gotten information that would serve us well over the next two days, set up our lobbying strategy and were ready to hit the Hill running tomorrow.

After we got some sleep.
Posted by Monica Roberts at 1:04 PM