Another Year, Another Student Booted From Their Prom 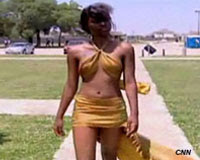 Ah graduation. Is it me or does it seem as though every year we have a story that blows up in the news about a student being booted from their prom for clothing issues?

Last year it was my teenage Houston homegirl Marche Taylor, who wasn't allowed to enter Madison High's prom at the Sugar Land Marriott hotel by school officials because of her skimpy dress. The heated argument that ensued with school officials ended with Ms. Taylor getting busted and taken away in handcuffs by the Houston po-po's.

I posted two years ago about KK Logan of Gary, IN who was banned from attending the 2006 West High School senior prom by Principal Diane Rouse despite wearing women's apparel during his junior and senior year.

KK with the help of Lambda Legal filed a lawsuit which is now percolating in the federal Northern District Court of Indiana.

Well, it seems as though the peeps of Guam's George Washington High School weren't paying attention to the Logan case because they just banned a student who calls himself 'Jeremy' from attending his senior high school prom in feminine attire. The guidelines created by the school's Prom Committee didn't contain any prohibitions against wearing opposite gender clothing.

"Going to prom is supposed to be like a Cinderella story. And this is no Cinderella story. I said, 'Naw-aw - I don't think so.' I'm not letting this go," promised "Jeremy". Unlike Cinderella, the local senior got booted from the ball...because he showed up in a dress.

"They didn't like the fact that I was in a dress. I was dressed appropriately following the girls code, and I looked on the list of the rules and it didn't say 'no cross-dressing, no transgenders or opposite dressing'. All it said was 'males and females'," he said.

Jeremy added that one teacher questioned whether it was appropriate for him to dress that way, saying, "When I walked in, one of the teachers put me to the side and had the audacity to ask me, 'Are you a male or a female?', and I said, 'What does that matter?' and he said, 'It matters!'"

We have yet to determine whether Jeremy had been dressing in femme attire the entire school year like KK Logan. What we do know according to the KUAM-TV story is that Jeremy hasn't received a refund for his prom ticket and spent $400 for that once in a lifetime night he can never get back.

It's also interesting to note that while Jeremy was being given the third degree by school officials, girls who wore tuxedos were allowed in.

Jeremy's classmates, who were cited as the reason for his denial of entrance to the prom because it would make them 'uncomfortable' made a mockery of that statement in subsequent interviews about the incident.

So stay tuned. Jeremy's case could get ugly before it's resolved.
Posted by Monica Roberts at 12:01 PM